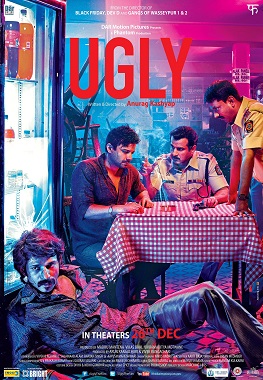 Anurag Kashyap’s dark drama Ugly gets you on the edge right from the hard-hitting trailer. From turning a direct case into a mouthful of questions, Ugly keeps you watching right till the very end.

The film portrays the kidnapping of a little girl of 10, who is out with her father for the day. Her parents are divorced and the ex-wife Shalini Bose, literally cloistered by her new husband Shoumik Bose (Ronit Roy). On the other side a power-hungry super cop who is increasingly dependent on a cocktail of alcohol and anti-depressants, makes his way through this whole event (Futela n.d).

Kashyap takes us on this complex dark tale; where the unforgettable characters allow us to continuously shift our suspects. The film is gritty, dark but also slow-paced, where we are taken through situations as if they would be played out in reality. From cop quibbles, burglaries, to suicidal attempts, we see the raw features of personas and traits. Despite being lost through the plot, we as the audience can pick up on the obvious everyday greedy treaties; selfishness of humans and government corruptions. Depicting ugly as truly ugly.

Cinematically, Kashyap perpetuates the eeriness through urban still shots which mundanely connote the lifestyle of the character. The film plays with audio and visuals in an engaging way, where it sometimes uses one or the other. For example, the burglary scene powerfully uses the stigma of silence together with chosen snippets of glass shattering to create a memorable scene. This also happens in tensed scenes, where it differentiates Kashyap’s filmmaking techniques, rather than following the conventional Bollywood path. On this note, Ugly doesn’t consist of any item-number Bollywood tracks, rather it uses a mixture of pop music with siren-like repetitive sounds to illustrate the montage.

Ronit Roy as Shoumik Bose plays the ultimate cop who just can’t keep his cool. His hot temper leads to violence, wrong choices but also strokes his character’s ego. Roy’s straight, sharp face fits the inspector role, where we somewhat despise his arrogance, but soon adopt his techniques. Despite him doing the right thing, we as the audience are always one step behind him, again making his character superior.

The 10-year-old girl’s real father, Rahul Kapoor played by Rahul Bhatt pulls off this attempted wannabe actor who’s looking for his break. Despite striving the heroic portrayal, Rahul undeniably falls off the ladder, where his actions sure have consequences. Although we see his innocence, Inspector Bose always questions our trust, soon making Rahul into a suspect. There are elements of Kapoor’s past which somewhat makes him unlikeable, desperate and un-gentleman like. Hence, his true colours gradually show when the puzzle still has a piece missing and impatience takes over.

Shalini Bose (Tejaswini Kolhapure) as Rahul’s ex-wife and Shoumik’s current wife definitely succeeds as the pathetic mother who’s more worried about her lack of alcohol rather than her problems. Tejaswini truly pulls off a selfish character, where we see laziness and true greed for wealth within. From her baggy eyes to loss of hope at life, Shalini also becomes one of our suspects, simply due to her lack of motherly affection to her missing daughter.

Last but not least, the ultimate attempted hero Chaitanya Mishra played by Vineet Kumar Singh is definitely one unforgettable character. I believe it’s down to his appearance within the film, which comes across as this 1950s actor with his fresh moustache and blazed tucked in shirt. Anyway, despite his old-school look, Chaitanya begins as the sidekick and soon becomes a central protagonist. His fear with a stir of bravery shows his split personality, where we applaud his tricks.

Despite the enthralling suspense, Ugly fools us with a few longer paced scenes which ultimately feel unnecessary. Likewise, with no spoilers given, I believe the ending and ultimate reveal isn’t satisfying enough. The narrative mirrors a cat and mouse chase and vice versa, which has tendencies to happen in India. Through this chase, the balance between the cast is just right, where everyone receives plenty of screen time but also back stories justifying their relevance and connections. Overall, Ugly is a mysterious drama which glues you to the screen with its refined cinematography and dark scenes, yet you would definitely need patience to get through the entire film.