Three different, but related families face trials and tribulations in their own uniquely comedic ways. (IMDB)

ABC’s Modern Family is one of the best TV Comedy series out there. Filled with epic tales, endless laughter and genuine characters, we are set for truly a modern experience.

Golden Globe winner for best Television series plus an outstanding 54 wins and 118 nominations, Modern Family is an un-missable TV show. A humorous documentation-drama on the lives of three very unusual yet relatable families. The show takes you on a entertaining journey, leaving you wanting more!

With a genius script, from Writers Steven Levitan and Christopher Lloyd, the comedy is definitely pulled through and rises to the top. The jokes, puns, comedic chases and random slapstick moments are just phenomenal! Each family is shown with equal screen time together with moving plots and exciting climaxes.

Of course the best aspects of the show is the wonderful cast whom perfectly deliver their lines and never fail to impress. The actors are outstanding, complimenting the successful writers and direction given.

Mother of three lovely or shall I say ‘different’ children, Claire Dunphy (Julie Bowen) is one of the loveliest characters. Her immediate rushing of getting things rights and striving for that perfect family is humorously mocked at. She portrays this vulnerable, motherly persona in which we can’t help but fall for and anticipate things to go right for. Didn’t you just love the scene where she was toothless?

character I have ever seen. His dialogue is unforgettable and extremely demonstrates that pathetic yet entertaining. The slapstick characteristics are heightened by his confused facial expressions and natural gestures. We can’t help but adore his enthusiasm and contribution to the show. Phil always gets the wrong end of the stick. “I’ve always said that if my son thinks of me as one of his idiot friends, I’ve succeeded as a dad.”

Brainless, teenager Haley Dunphy (Sarah Hyland) propels the stereotypical American teen-girl image. Though her stupidity and lack of intelligence adds to the humour, making her more memorable. Wearing extremely petite sized clothes, Haley pushes her role, bringing her character to life and more believable. Will she ever go to college?

and intelligence in the family (God knows where from). Her scientific, mathematic and grammatical mind, along with her corrections definitely goes a long way. Alex’s cleverness is appreciated, where we like her geeky persona. 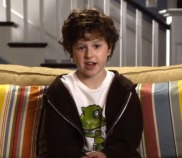 The third child. Yes how can we forget, the ultimate weird but awesome kid, ‘Luke Dunphy’ (Nolan Gould) is one of the most memorable characters. All things weird, random and silly, he’s that little brother you’ve always wanted but would hate. Luke has evidently gone on his father, Phil, adopting the slapstick comedy, leaving you in tears of giggles.

Father of Mitchel and Claire, ‘Jay Pritchet’ (Ed O’Meill) is a very quiet and relaxed person.

Stumped with uncountable wealth, Jay doesn’t let the pride get to him. Honestly, he’s a very moody, grumpy person with a reserved persona. Either way Jay doesn’t like the smell of hassle and lets just say ‘family reunions’ are a nightmare to him.

Civilised, gentleman ‘Manny’ (Rico Rodriguez) who acts older than his age is an absolute delight to watch. His wise speeches and extraordinary general knowledge is completely bizarre but accountable. Manny’s heart is huge, with a sweet personality. Definitely equating to a similar sized IQ.

profoundly shows her effort. The sparks of terror and growls she fulfills are applaudable. And trust me, they are Bold, capital B. Gloria (Sofia Vergara) whom is 20 years younger than Jay, surely tries her best as a mother, especially with one on the way. Lets just see what this leads to.

Loving, Gay buddy, Cameron (Eric Stronestreet) is by far one of my favourite characters from Modern Family. Cam’s way of speaking and addressing situations is hilarious. His, epic yet serious tone, reinforces his happy-like, perfect character. Part time father, well some would say mother and music teacher, Cam has some hidden talents. Oh yes, I’m talking about Mr.Fizbo. (Maybe he should get his own paragraph.) The slapstick comedy performed and theatrical body language is unforgettable. Cam doesn’t take no for an answer and sometimes says yes far too quickly. But for how long can he go? Would dressing up as an animal, sitting on a tree do? Lets just say, for appropriate reasons, it shall.

Cam’s partner ‘Mitchell’ (Jesse Tyler-Ferguson) is undermined as a lawyer and father, according to his dad Jay. His subtle

humour and “okay-fine-just-this-once” persona continuously revolves, where we want to see more of him. Cam and Mitchell make the perfect couple. Their unconditional love complimented with petty fights and amusing bickering, captures the true essence of ‘realism’ in relationships.

Now seeing as I mentioned every main character from Modern Family, how could I

miss out the most important person? Adopted ‘Lily’ (Aubrey Anderson-Emmons) has sure grown up since series 1. We can literally see her words developing (remember the foul mouth episode) but also the development of attitude. Lily is an adorable child who definitely fits into this Modern family.

Overall, every character is undeniably perfect for the show. With a great set, superb acting, hilarious comedy and confident screenplay, Modern family deserves all the awards coming its way. Keep watching!