Director Steven Quale brings to us a stormy adventure in his latest, Into The Storm.

Into the Storm cuts back and forth to the documentary film crew and a family. The two teenage sons, Trey (Nathan Kress) and Donnie (Max Deacon) prepare for the graduation ceremony by filming snippets of clips for the future. Their strict father decides it’s a waste of time, making him distant from his sons. As the film crew or should I say ‘Storm-Chasers’ Peter (Matt Walst), Daryl (Arlen Escarpeta), Jacob (Jeremy Sumpter) focus on the weather eager for a storm to capture, they prepare to not miss the slightest action. Whilst Allison (Sarah Wayne Callies) is on lookout for weather changes and frequencies, Pete, the person in charge of the production company becomes far too engrossed in wanting to find a storm. On the other hand as the storm kicks in, Donnie becomes trapped in an abandoned location with the girl he likes – Kaitlyn (Alycia Debnam Carey), whilst filming her college video. With his father searching for him, the storm worsens and he bumps into Allison and the crew. Merging them together their aim is to not only save Donnie, yet to survive this disastrous situation, oh and filming it all up close. 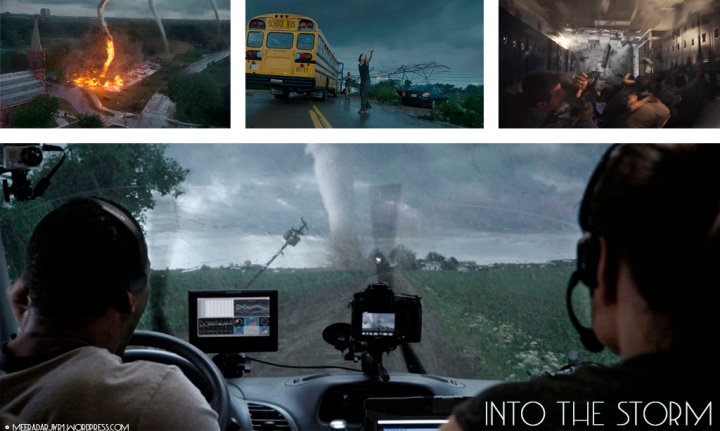 Into the Storm has a very simple narrative, in fact its quite conventional with the whole angry father, fearless camera crew, mother who’s worried about her daughter etc. Yet what makes Into the Storm entertaining is the remarkable CGI effects. The storms and ruptures in the clouds are extraordinary, where it very realistically captures the driven moment. The rapid motion together with the abrupt sound effects leave us glued to the screens. In the Cinema, the effects come across very powerful where we quench for more action. The whole city is truly destroyed and its clear fine detail has gone into making this happen. From the pulls of the wind sucking in humans to buildings collapsing, to the school corridors being hit by the storm – the visuals are mesmorising. One of my favourite scenes is the moment where Pete lands himself right in the eye of the storm thrown out to complete calmness. The clash in the weather changes, from complete distraught to silence was a moment to remember.

The cast was great, where their chemistry on screen is performed very well. Matt Walsh accomplishes to portray this selfish character who only cares about his tapes and capturing the storm. Loving his bullet-proof, camera scorn Titus – the Tornado Intercept Vehicle, Pete wants this to be his moment, where his Titus prevents him from danger. Trying to be a father-figure role to camera operator, Jacob, Pete manages to twist him into danger, leading to negative results. The crew works well together on screen, though none of them seem to be happy in their jobs at the beginning.

Sarah Wayne Callies as Allison clearly proves her intelligence in the field she has studied in. It’s obvious she knows what she’s doing, where her bravery is applauded. When she knows she’s right she’ll let nothing get in the way.

Richard Armitage as Gary begins off to be a stubborn father yet as the films goes by, he realizes his mistakes and notices the gap between him and his sons. Fighting his life to find Donnie, Gary becomes the hero of the film where he saves Allison. On screen him and Allison have this spark which is noticeable yet not reinforced.

Max Deacon as Donnie was quite different to his brother. Deacon portrayed a quieter role where his nervousness was visible when talking to his crush. Yet becoming trapped with her brought out his confidence, where he bravely tried his best to save them both. The moment where we believe Donnie is dead was impeccable. The emotion in that scene was set high, where the moment holds on for quite a few minutes making you assume something bad is going to happen.

Overall, Into the Storm was visually a great film to watch. The sound effects together with the realistic fiery storms were stunning to see on the big screen. Unfortunately, the conventional narrative was slightly disengaging, where the film became predictable. Writer John Swetnam consisted of several morals within the film, mainly to appreciate life and the people around you, as you really don’t know what’s approaching round the corner.