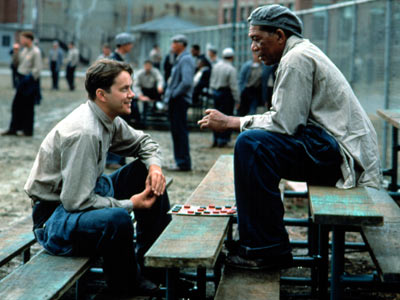 After watching The Shawshank Redemption I was speechless. Number one in the IMDB top 250, nominated for 7 Oscars and 18 wins, Frank Darabount sure has made his trademark. A moving film filled with great actors who bring the true story to life.

The film begins with an intense court scene, where the main protagonist Andy Dufresne (Tim Robbins) is allegedly accused for murdering his ‘cheating’ wife and her secret lover. The flashback scenes injected in between remind the audience of the incident, where in our eyes Andy clearly seems to be the culprit. Thereafter, Andy’s journey and life in prison begins, where he meets some incredible people but also some repulsive attitudes. Far the allegations be true, as Andy believes he has been framed. 20 years of prison becomes his new home, until one rainy night; he discovers the ‘light at the end of the tunnel’.

“On the outside I was an honest man, I had to come to prison to learn how to be a crook.” – Andy

Through such struggle, Robbins perpetuates such as real and honest character, where we truly believe his verdict. His hard working soul complimented with his brainy mind heaves this ‘real’ personality, where we simply want him to be free. Being good with numbers, Andy’s skills are noticed and thus used in the ‘finance department’.

The film takes us on this emotional journey, leaving us in

cold spaces, but also at times uncomfortable due to the gratifying scenes. Aggression and abuse becomes the wardens’ middle name, placing Andy in tough situations, leaving us in a nervous wreck. Though, impeccably these scenes are so powerful in their motives, where the core life of Shawshank Prison is utterly crystal clear to us.

Morgan Freeman is an absolute memorable addition to the film. Playing the role of ‘Red’ “the man who can get anything”, Freeman definitely displays a true friend and gentleman type of persona. Subtly and calmly guiding us through the film with the voice-over, we become indulged in his voice and narration.

A true compelling take on the world out there compared to a closed, bleak atmosphere behind iron bars. Shawshank Prison is a different world all together. Through plight and struggle, Andy captures all the finest details, cleverly matching the pieces to a very dark puzzle.

The whole cast, particularly Andy’s pals are heart-warming in their very own way. A group of helpful men, who support Andy through thick and thin is evident. Likewise, the innocent librarian ‘Brooks’ is relatively simple and again adds an engaging layer onto the film. His

release from working in the prison is shown through a montage, where the big world is too advanced and fast for him. Thus we are shown an emotional and somewhat shocking scene, where Brooks’ name finds a place in our heart.

Overall, I could definitely expand on various brilliant scenes in the film, however in a concise way I can honestly say that The Shawshank Redemption is a remarkable film. From the beginning, middle to the end, the audience was shown a true intake on life of prison. Andy’s character is immersed in a way, which shouts ‘innocence’ but somehow is only heard by us. Freeman beautifully tells us the story though his inspiring quotes and honest soul. At the end, we are left with peace and are satisfied with the outcome, simply leaving us gawking at such a realistic and thought provoking film.